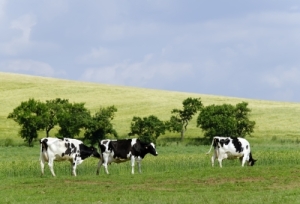 When work , laundry, dishes are all piling up and you want to run away from it all, the best place to go is Pinterest. I know because I have been there a lot. Scrolling down the crafts feed is bewildering:  it is simply bursting with ideas for rustic, barn weddings: lots of burlap, distressed wood, tables laid out on emerald green fields with a picturesque cow or a duck adding an idyllic note. This gorgeous visual has very little to do with an actual, working farm as one writer pointed out here, but neither is it true, as the piece describes, that in the real world cows are raised in “warehouses” and are a source of pollution. In the comments, those who actually raise cows contributed facts to the discussion, most of which would be new to that many among us, far removed as we are from the realities of food production.

It is common to read about cows contributing to global warming by releasing methane into the atmosphere. It is argued that if we stopped raising cows for food, this would be a greener choice. But if we just stopped eating beef what would happen to the cows? Well, they would live long and prosper, (check out the calculations in this excellent blog) leading to exploding cow populations which would be standing there chewing, polluting and watching barn weddings and wondering what this was all about. The only way to do away with the methane problem would be to actually kill all the cows.

The other great debate centers around the question : “what is an authentic cow?” What is the difference between a cow grown on GMO feed and one that is not? Surely, there must be a difference, the former cannot be the same as the cows our ancestors raised. But, in fact, they are exactly the same: the animals are the same,the milk and the meat are the same. This study looked at livestock productivity and health from public sources for 100 billion animals, starting at 1983 before the introduction of GMO feed in 1996,  through to 2011 which had high levels of GMO feed in use; and found no negative effects on livestock health or humans who consumed animal products.

And still, today, social media is bursting with people who are concerned because not enough tests have been done over a long enough period of time. “Facts do not cease to exist because they are ignored.” Neither, sadly, do dishes, no matter how beguiling the alternative!