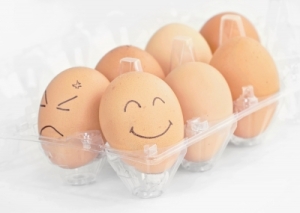 A piece from the Modern Farmer analyzes the curious contradiction: consumers strongly support humane treatment of animals (cage free eggs, grass fed beef, larger spaces for livestock) but when they go shopping they still buy the conventional and, often, much cheaper variety.  California is an interesting example where consumers have voted in favor of bigger cages for hens but 85% of consumers continue to buy conventional eggs , often from out of state. The eggs from other states are cheaper and the egg industry in California is being undermined because of the law that sought to promote animal welfare.

So why does the voter behave differently from the shopper? Perhaps its because the idea is appealing and people want to do the right thing, but when faced with budget constraints the decision making process works in a different way. There are of course, many consumers who will pay more but that is a small proportion.

This story made me think about the labeling issue again: the consumer is reading the “cage free” or “organic” label but ultimately decides based on the resources available. So how important are labels anyway? From the producers’ perspective, being forced to make large investments to satisfy legal requirements which are then not valued at the market,  or even cause losses, seems unfair. Even for the supporters of animal welfare, the labels have little value: both “organic” and “cage free” eggs allow for “beak cutting and forced moulting”, that doesn’t sound all that great from the hen’s point of view, does it?

Still, the “happy eggs equal healthier you” idea has gained traction: Panera, Starbucks and McDonald’s are all moving to cage free eggs by 2020. Will this mean higher prices for the consumer? Will that determine where we eat? It will be interesting to see what happens.