Another Green Revolution in India? 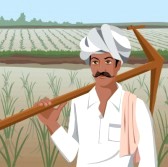 In the 1960s, India was facing  a severe food shortage. The Indian economy was decimated by 200 years of colonial rule and the 3 wars fought after gaining Independence in 1947. The country was struggling to grow enough food to feed its people and did not have the resources to import food either. Finally, it was food aid under the US PL480 program that enabled India to to stave off the threat of starvation for millions.  It was in this situation that India decided to adopt Dr. Norman Borlaug’s newly developed variety of medium wheat and what is known as the Green Revolution got its start. As productivity increased, so did rural incomes and many lives that might have been lost to famine were saved.

Despite the criticisms that have since been directed at this program, the enormous good that it did cannot be denied. This video captures the sense of what the adoption of this technology meant to India. While it highlights Dr. Borlaug’s efforts, what struck me most was the enthusiasm of the farmers for innovation, the openness to technology and the unsettling awareness that the path to adoption of technology today may be more difficult. Fifty years ago the decisions about farming were the domain of the farmer who had the knowledge to make those decisions, today the scenario is fraught with those who trust neither science nor those who have grown our food for years (in the case of Indian family farmers, this would mean over centuries!).